“Mummy, why did you tell me a long time ago to not go too far in the sea ?”

“Moanna is a princess that’s why” 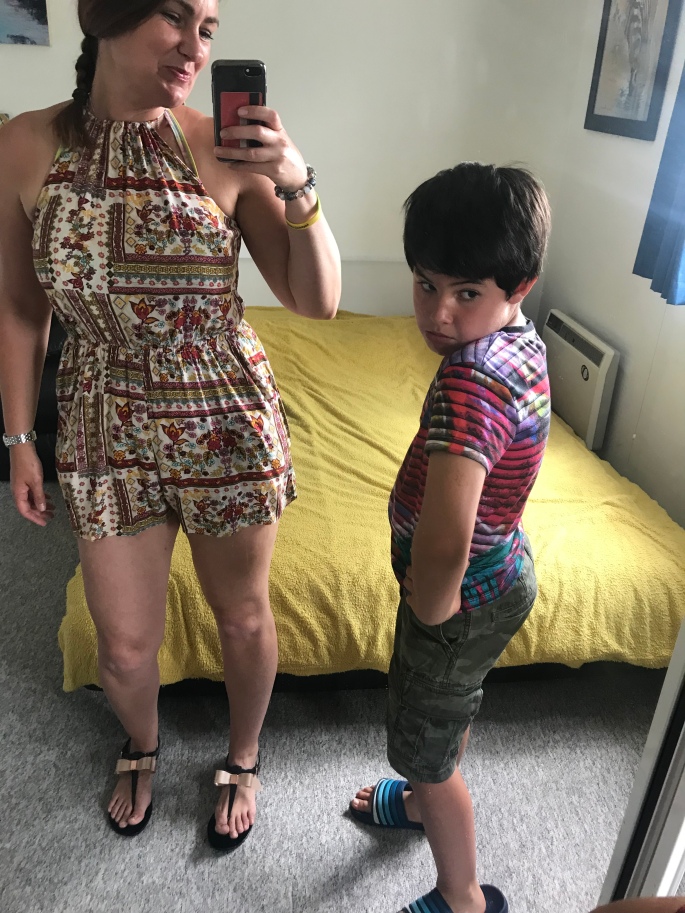 At the start of the week we had a little trip to the beach , our favourite place to be . We both love the sea , the sun and the hot weather and try to spend as much time at the beach as we can in the summer .

We have our favourite beach and we try to go there every summer for a few days. The beach there is beautiful and if the weather is hot enough it can feel like your abroad somewhere. The beach is sandy and about 7 miles long and with plenty to do for the kids.

Emir knows we are going to have a trip to this place this year and every single day he will repetitively ask me are we going this year , and how many no’s is it . And when I answer him he gets very stressed out.

Anyway the other day we decided to stay a little closer to home and went to one of our local beaches and it was lovely until Emir saw the sea gulls , yes the dreaded sea gulls ! He hates them . They are big, noisy and unpredictable, his worse nightmare all rolled into one. I don’t know who I feel sorry for more though, Emir or the seagulls as every time one ventured a bit too close it got a great big stone hurled at it.

“Mummy i hate the birdies , tell them to go away I’m going to hit them “

Apart from the sea gulls , oh and the floating sea weed that freaked him out as he thought it was a green jelly fish , we had a lovely time . A nice swim in the sea and a BBQ. 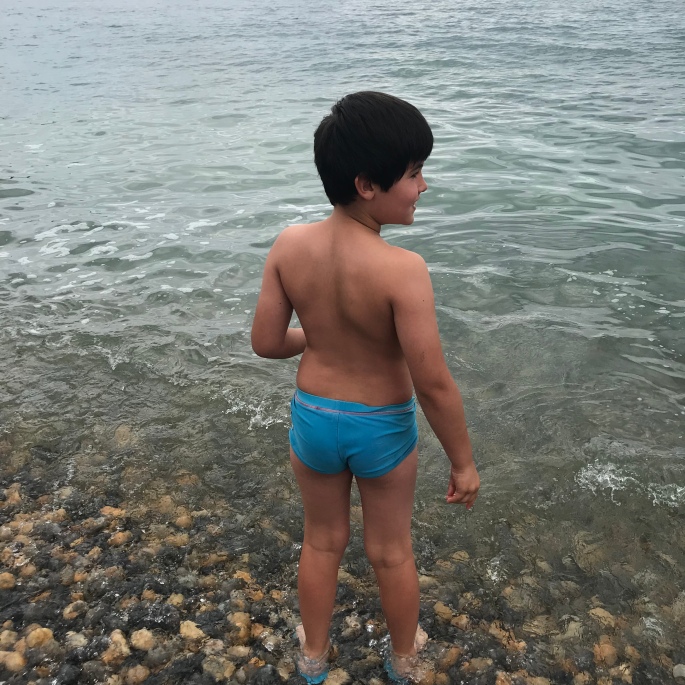 We played a little game in the sea , where he kept pretending to rescue me from the shark and the big waves.

One morning while getting ready for school , he asked me ,

Mummy can you order me a giant white balloon ?

I don’t have the money.

This week was the week the Guinea Pigs had to be moved outside . As lovely as they are , they are the smelliest things and even cleaning them out every day was not enough so outside they went . Emir has dealt with this very well actually . I thought he would get upset about it but he has been fine. Although he did get a little stressed when I told him the piggies are going to live in his class for a week before the summer holidays so he and his class mates get to look after them. I thought it would be lovely for his class to have them for a few days.

This morning at school drop off, as we arrived at school, one of his friends was in the playground holding Winston. It was so lovely to see. Having the piggies to look after for a few days has been educational for the kids and teaches them responsibility. It may also make Emir appreciate them more and want to be more involved with looking after them..then again maybe it won’t.

As you may or may not know but children on the spectrum often think very literally, so when I told one of my sons friends, to throw the veggies in the cage, that’s exactly what happened. Bruno nearly suffered concussion from a flying carrot. I am not 100 % sure the piggies are enjoying their stay at school.

“I don’t want someone else to take my Guinea pigs “ 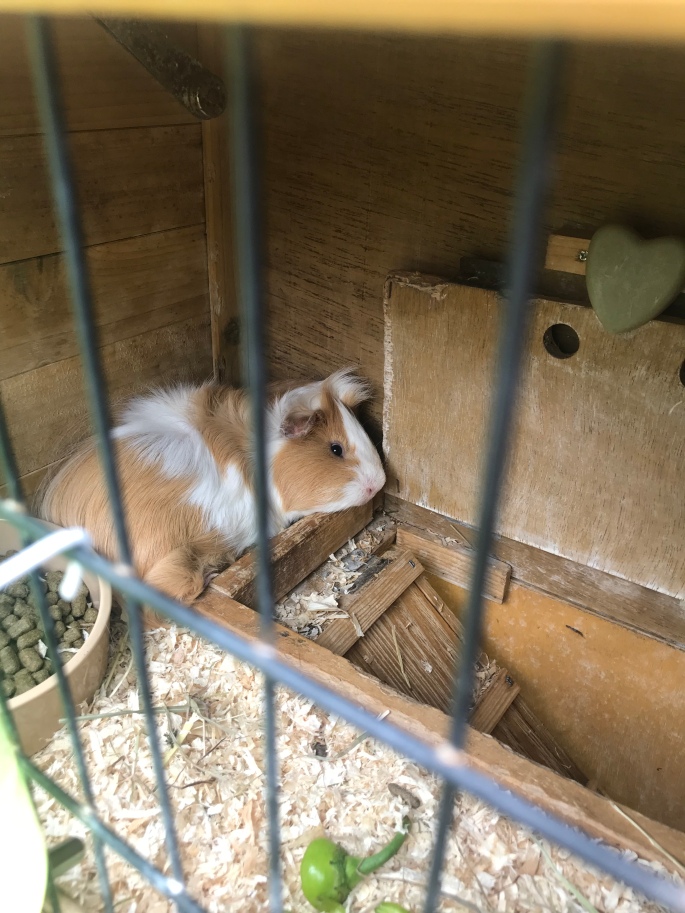 This week it was the school disco. It was held outside this year which was lovely and he took his pound coin and off we went . When we arrived his little girl friend tracked him down. He tells me he is going to marry her.

I want a wife mummy but will you still be my mummy ? I want you to be my mummy forever. I want to take you on holiday when I’m big up to the sky ” .

When the disco finished and i arrived at school to collect him, I could see all the children dancing and singing. It was a lovely atmosphere and all the children looked very happy. I always worry about Emir going to the discos as although he is very sociable, he is not aware of the social boundaries. Yesterday he thought it was acceptable to smack my friend on the arse, just one example.

Anyway, as with a lot of children with Autism, my son is often in a little world of his own, and that is ok. When I arrived at school and saw the other children dancing, i did wonder what Emir would be doing. Then i saw him, running laps around the outside of the dancing area. That’s fine. That’s what he does. He slept well that night.

This week we also ventured to a local lake , where you can actually swim, its lovely. The thing with my son is i have to be very careful what I actually promise him. You see children and adults on the Spectrum are extremely clever. My son is no exception.

When Emir wants something he will fixate on that and he will ask me for it over and over many times until it actually happens. If he asks to go to the lake for example , he will want to know exactly when this is going to happen and he will repeatedly remind me about every hour, every day, until it actually happens. This is quite hard to deal with but it is a part of who he is and i accept everything about him, so we just get on with it.

What is a little harder however is when i have found myself being coerced into agreeing to something I wouldn’t normally, just because he has asked me that many times that i kind of switch off.

Before I know it i have agreed to a week off school, a week by the sea, leaving today and a giant 6 foot weather balloon that will definitely be arriving today as well . Then when I have to explain to him that those things are not happening, well its not pleasant . So you see its never a good idea for me to zone out as I end up agreeing to sell my soul.

Anyway this particular trip to the lake was planned and it was very nice. When he is in the water , he is very calm and happy. This is definitely his happy place and therefore its mine too.

At the lake they also have this amazing park, he had lots of fun there and even attempted a really long slide . He thought it would be fun to lay down as it may make him slide faster , all that happened is he got stuck but we laughed it off and he did it again !

Of course we have had lots of balloon blowing sessions . His absolute favourite activity . The biggest balloon he has is a giant weather balloon as he calls it . It’s enormous. I don’t know how he does it but he can actually blow this up without using a pump , it does take a long time but he manages it . I can’t blow balloons at all , after a couple of minutes I go dizzy ! . 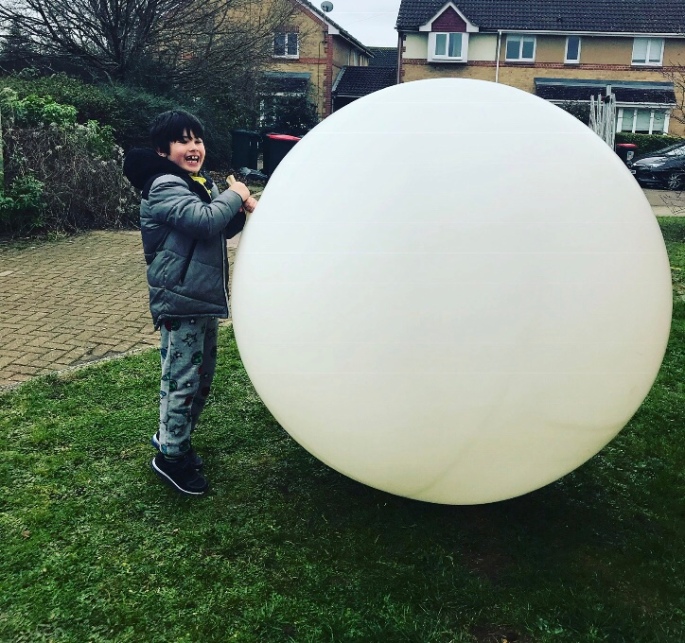 Thank you for reading. I hope you have enjoyed a little glimpse into our daily lives. Please comment or message me and let me know if you would like to see more posts like this where we share our adventures with you . I am thinking of having one day a week where I post just photos on to the blog , let me know what you think . ❤️🎈

Hello my name is Donna . I have an 8 year old son who is on the Spectrum. I have gained an Autism Awareness Diploma , Special Educational Needs Diploma , Understanding Autism and other qualifications . I am a Family Ambassador in my current day job working on the Hidden Disability Campaign and i am currently helping our local Autism Ambassador with a Relaxed Performance Campaign , making theatre accessible for all. My blog “The boy who loves balloons “ follows my boy and I and our life on the Spectrum. In my blog I share our experiences through humour , hope and happiness and raise awareness. I also champion local initiatives and I am keen to branch out into other areas. I have a passion for writing and raising awareness of autism. 🎈 View all posts by Donnamariebalkaya

Recipes showing step by step directions with pictures and a printable recipe card.

Hi! I'm Emily. I have Sensory Processing Disorder and I am Autistic.

The Musings of a Writer / Freelance Editor in Training

A blog about Autism. 🌈 theboywholovesballoons.com

Arts & Culture from Around the World

A daily selection of the best content published on WordPress, collected for you by humans who love to read.

A blog about Autism. 🌈 theboywholovesballoons.com

The best longform stories on the web

The latest news on WordPress.com and the WordPress community.